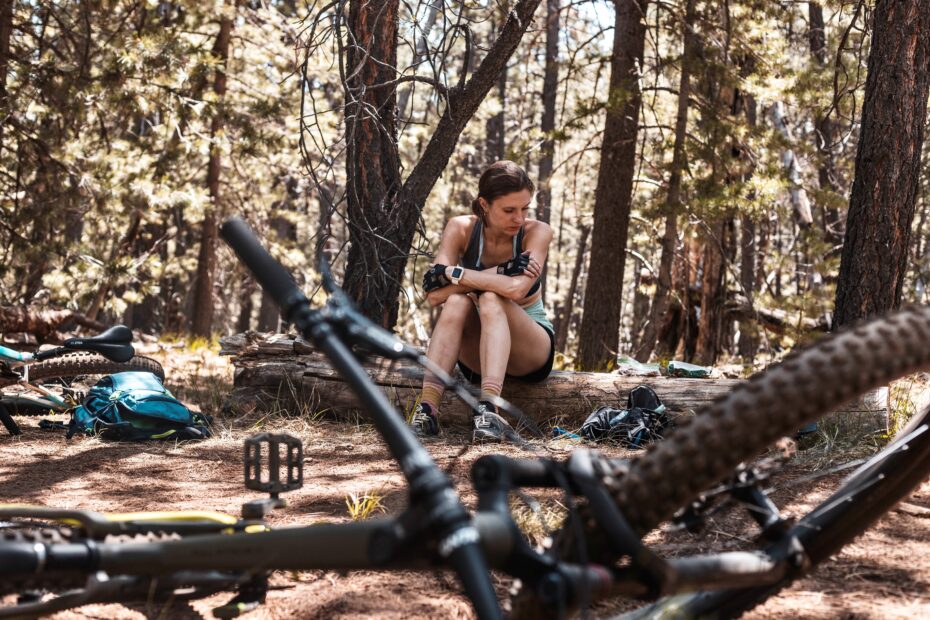 I wish I knew exactly what happened, but I don’t. All I know is I was excited to move in with my new boyfriend, I was on a high, and life truly was great! One day I could walk, and the next day I couldn’t. My balance and proprioception were lost, and my health spiraled out of control.

It started at the beginning of 2020. I was sick with an upper respiratory infection while backpacking across Catalina Island. I powered through the trip and completed my very first official backpack. Shortly after that I had developed “bronchitis” which lasted for about three months. It got to the point where I could hardly hold a phone conversation. Then the cycle of “sinus infection” after “sinus infection” began. My asthma was out of control, and I was on high dose steroid inhalers and a series of antibiotics for the “sinus infections.”

Small hikes outside my backyard resulted in coughing fits with blood.  I started having daily panic attacks. The attacks became more frequent until I was eventually stuck in “fight or flight” at all waking moments. I never felt calm or safe. There was no escaping. There was no relief; not even for a second. The moments of forgetfulness turned into a permanent state of confusion.

I stopped being able to sleep through the night. I developed chronic dizziness, visual disturbances, derealization, and worst of all, a cognitive decline. I found it hard to talk.  It was difficult to remember words.  It was hard to think, to focus, to walk, and even to sleep. Just being human became a daunting task.

I dropped to 98lbs and developed over 60 symptoms. One day, my boyfriend and I went for a walk and my vision got completely distorted. I didn’t know where home was. I recall looking at him, feeling pathetic,  and asking “Am I always going to feel this way?” I felt like a 90 year old woman, losing her mind.

This 24/7 feeling of being “intoxicated”. Specialist after specialist. 911 home visits, ER visits, all boiled down to “anxiety.”   Temperature drops to 97. Sitting in the shower. Standing in the shower. Crying, “please help me, please.”

It was finally suggested I see a functional medicine doctor.

I was FINALLY tested to confirm I was exposed to toxic mold. It was something that I had considered and tried to research, but the information is hard to source. I was suffering from chronic inflammatory response syndrome. I am the 25% of the population that does not detox from the environmental toxins in our world that we all face daily.

I am the canary in the coal mine.

These results, and this confirmation gave a partial explanation to my life long battle with mystery illnesses that often uprooted me from apartments and homes I moved into or spent a lot of time in.

I relocated back to Indiana to live  with my Mother.  To my surprise, I got worse. I was isolated, alone, and felt somewhere far away from this earth. I had to lay down all the time. Anything other than laying felt like spinning. My right hand stopped working. It was weak. Tying a shoe was difficult. Turning a radio knob was difficult. Opening my wallet or mail was nearly impossible. I was weak and my eyes wouldn’t focus. I was an alien. I dragged myself from bed to the couch. I tried sleeping outside in my car or in a tent in the backyard. I would do all of this,  take a bath and crawl back into bed to do it the next day all over again.

You will wonder who you are and who you used to be. You won’t wonder what the future is like because you won’t be able to see one. The light from the sun will be so blinding you will count the hours to dark ,and when darkness comes, you will go to sleep feeling weak & hungry for air. You wake up at night feeling your heart beat out of your chest reminding you that you’re alive, but you’re body is struggling.”

It is one of the ugliest, most unrecognized illnesses.

I am still here. I’m here to tell my story, to try to shed light on a dimmed illness, and to help bring awareness to those who may be suffering and those who see others suffer. Please trust them when they say “something is wrong,” because it most likely is. I’m so thankful I got the support I needed and was listened to and taken care. I couldn’t have done it alone. Literally, I don’t know if I would still be here.

But, I am still here, in a new light. I hope if you suffer from chronic illness, you can find the strength to keep going. You can find the right sources. With a combination of functional medicine and traditional medicine, I’m slowly getting better. Tomorrow,  I know the sun will rise. It always does, and it’s usually more beautiful than the one before.

“Blinding was the sun so I pray for dark

A cycle of wanting to escape the inescapable